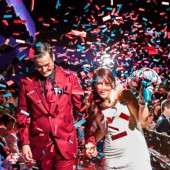 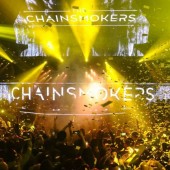 Take Your Event From "Great" To "Wow!" With Flutter Fetti There is special and different, and then there is "wow!" Flutter Fetti is definitely a wow. If your clients are looking for a product that will take their event to the next level, this needs to be one of your first suggestions. You can't help but look at their website and wish you had an event to plan right this very minute so that you could use their products.

Flutter Fetti is based in New Orleans, and in fact, their office is situated in the French Quarter. The folks at Flutter Fetti take the spirit of that city and bring it to every event, whether it's a gender reveal party, a corporate event, wedding, or even Paul McCartney's world tour (yes, Flutter Fetti did that event!).

Flutter Fetti is engineered to stay up in the air 10 times longer than ordinary confetti. Its special shape makes it float and flutter and look dazzling all the way down. Their streamers come in a variety of colors; some are made of tissue, some metallic, and some combine both. They come in a large variety of colors that includes neon, which glows in the dark. You can even rent or buy continuous flow confetti blowers. They take care of everything but the clean up, which is pretty simple, considering. Flutter Fetti sweeps up very easily. It can also be blown with a leaf blower into a corner then simply swept up. What's even better is Flutter Fetti and streamers don't get ground into carpeting. In addition, their products are biodegradable and flame retardant, so there is never a worry in using them.

Other reasons to love Flutter Fetti: it's budget-friendly. They offer you the guaranteed lowest prices and volume discounts. It's amazing what you can get for so little. If you are graduating, give them your school's colors and they can personalize your graduation party favors. They offer fast shipping where on-time delivery is guaranteed and there is no extra charge for rush orders. They have fantastic customer support and no minimum order requirements. All products are made with ease in mind and were designed for the new user. They even provide instructions that go out with every product they sell. It makes you want to throw a little confetti around just for that. The company was started by Jim Watkins, a man who was serious about fun. It all started when Jim, who had a career in construction, found out that Universal Studies wanted a confetti vendor to make a volcano special effect. Jim experimented with cutting tissue paper at his dining room table, creating his flutter fetti and sghetti fetti and winning the bid. That was just the start. He learned to create special effects and toyed with visual impressions.

Patents grew as he invented streamers with bubbles, corkscrew confetti, and products that combine streamers and confetti at once. His most sold product is the hand flick confetti launcher, a product that launches that famous confetti with the flick of the wrist.We mentioned Paul McCartney earlier, but that isn't the only "big" event this company has made special. Flutter Fetti was seen in the "Nutcracker" ballet where the confetti mimicked the effect of snow. It's been found in the Macy's Thanksgiving Day Parade. It's been seen onÂ "Dancing with the Stars," the touring show of "Footloose," and its confetti has fallen softly down on the winners on shows like "Regis and Kelly." Since their confetti floats longer in the air than conventional confetti, movie producers like to use it because it looks great on long takes. But it's not just the confetti that's taken center stage: their glow in the dark die cut butterflies have been featured at Busch Garden's Show "Takonga."

They can handle events that are huge, but they also keep an eye out for your simple celebration, making it feel just as important. As they say about their birthday confetti and streamers: "It's like having a parade thrown in your honor!" Imagine after your wedding having that first dance while white confetti and streamers float down around you and your new spouse, or finding out the gender of your baby as you see blue or pink swirl around you. It takes every happy moment and turns it into a true celebration.

Flutter Fetti is great for any event, even those you might not even think of at first: food, wine, film and art festivals, sporting events, concerts, parades, Bat/Bar Mitzvahs, New Year's Eve celebrations, political rallies, grand openings, church events, motivational meetings, and Mardi Gras (of course!) While you're on the site, check out their blog for fantastic ideas for your events. So, if you would like a little magic in the air, start with Flutter Fetti!

Bring Your Event To Life With The Flutter Fetti Fun Factory

November 8, 2010
It's never to early to start planning for wedding season, and with that comes customers wanting party supplies to create a unique event. Why not offer your customers something truly unique with The Flutter Fetti Fun Factory. This will serve not only weddings, but any parties! This wholesale company offers all things confetti just for you and your customers. With their great products, every party will have that extra wow factor.

The Flutter Fetti Fun Factory's mission is to bring your customers a product that will bring excitement to their party or special event. They want to create a special effect at your customer's parties that they won't soon forget.

Flutter fetti is not like your ordinary confetti, it has a floating effect to it. It is created with a unique shape that helps it achieve a flutter like effect. A funfetti effect that will let your customers enjoy it longer.

With so many unique confetti products, customers will find something suitable for all their events. Corkscrew confetti, flutter fetti, short & long streamers, die cut confetti, party & wedding favors and don't forget the confetti launcher, all these things will bring customer's parties to life. They even break it down into different categories, as to which confetti would be ideal for a certain event.

Some examples are wedding confetti, concert, sporting events, New Years Eve, graduation, birthday parties and even parades. They even help plan what type of confetti you'll need for the size of your wedding or party location. The Flutter Fetti Fun Factory is there for all your needs. With all the different variety of confetti, your store will be one of the best stops in town for all your customers unique party accessories. Let your customers enjoy a visual treat at their wedding. Have them envision walking back down the aisle to a sea of confetti featured in a variety of colors. This is a unique alternative to the usual rice and petals, it adds something unique.

How about birthday confetti? Kids and even adults will absolutely love this special added unique party decoration. This fun wedding accessory is not just for weddings, but can be for any event. You'll find yourself carrying this all year round for the variety of parties your customers will want to host.

The Secret Side Effects of Confetti An uncontrollable desire to hug the nearest person. Sporadic shrill cries of enthusiasm. Faces wrinkled with surprise. Nervous? You should be. These are the secret side effects of Flutter Fetti confetti. At any given moment, someone somewhere in the world is using confetti, thinking about confetti, and experiencing these reactions.

Prepare yourself and your store for joyous outbursts because there is no stopping the excitement elicited by party confetti. As the tiny bits of confetti roll through your customers hands, they stop to imagine the last major celebration that they attended where confetti launchers flooded the sky with majestic confetti. Party rentals often stop with the same old gizmos and gadgets. Set yourself apart to your customers by renting confetti shooters!

Confetti is sweeping the world of party supplies as traditional events such as weddings are replacing rice with more environmentally friendly products. Colorful confetti is a great way to shower the bride and groom with good wishes while wishing the planet an equally pleasant life. Table confetti adds pop to boring tables. Show off table linens and tabletop items with decorative table confetti! There's a great way to use confetti at almost every event and your customers will be glad that you made it possible.

Just received my order of hand flick confetti sticks. It was a last minute decision for our daughter's wedding - only 2 weeks away. Service was fast and David Cox of Flutterfetti was very courteous when answering all my questions. We think this hand flick type will work best with children attending AND will look great in the wedding pics. Will highly recommend this company to others and definitely use for ourselves again.
Beatiful and fun
posted by Irene in ID

What a lovely pop of color and fun! We used this in white and bright pink at the end o our ceremony and it looked so pretty and everybody loved it. The pictures are wonderful. Lots of fun. They work great!
Flutter fetti
posted by Gabrielle in NE

Purchased these for a wedding send off. Saw at a previous wedding and thought it was a great idea. Pictures turned out beautiful with the confetti. Great looking product and very fast shipping. Would order again and recommend to others!
McClellan Wedding Flutterfetti
posted by Brittany in AL

It was beautiful and worked out perfectly! It added so much fun to our special day. Thank you!!
Flutter Fetti Confetti sticks are great
posted by Patrica in IN

We used the 14 inch flutter fetti confetti sticks this past weekend to shower the bride (my daughter) and groom as they exited their wedding reception this past weekend. They worked easily, were fun for guests to use and created a spectacular send off. We were more than satisfied with the sticks and would highly recommend them!!!!
Amazing!! Such a huge hit
posted by Katie in FL

Amazing!! Such a huge hit at our wedding!
Gender Reveal
posted by Courtney in IA

Thank you so much for creating the confetti sticks for our gender reveal! No one could see a hint of color. Everyone in attendance and everyone who has seen the video has said it is such a unique way to announce and that was just what we were looking for! Thank you!
Love!
posted by Kaela in IN

flutter fetti has been a favorite of mine for a couple years now and it did not disappoint for the gender reveal party! The white stuffed into the ends even saved us when my grandpa decided to flick it a bit too early Hahaa
We used the small colored
posted by Lauren in CO

We used the small colored confetti tubes for our wedding and it was awesome! The pictures were unbelievable and everyone had so much fun with them. They did fall to the ground, but people started picking it up and throwing it again. Would definitely recommend this product for a wedding!
Great for Graduation
posted by Ian in CA

We used the 18" Airless Launcher at my daughters high school graduation. We ordered the streamers in the school colors and launched it as she got her diploma. It worked out GREAT and she noticed the streamers!
nice touch
posted by Dina in CA

@uofmemphis The University of Memphis sent out 2,575 of our "Hand Flick" Launchers to each graduate with their Tass… https://t.co/8Ygk3ZZLoG
Latest Tweet from The Flutter Fetti Fun Factory